Note:  This is the final post in the series including all of Kelly’s emails and photos to families and friends…

I have a few more pictures to share now and a few closing comments to share that slipped my overtired mind last night.

Gordo’s shot of us coming up the hill to the finish (thank you!), plus Sean’s awards blended with what the kids made him.  As you know, the awards were not his focus, but they did give him a really nice belt buckle, a finisher medal, and a jacket.  Of course I made him put the jacket on this morning for a photo with a background view of Twin Lakes/Hope Pass. :-).  I doubt that I can get him to ever wear the belt – I have the cowgirl boots in the family – but it’ll look nice displayed in his office or workout room.

Some remaining thoughts and tidbits…

WINFIELD – If you recall, Gordo hopped out of the car and began trekking up the road through the line of traffic for an unknown distance in hopes of meeting up to begin pacing in time for Sean’s turnaround.  He ran nearly 2 miles and then also resorted to hitchhiking the remaining road distance with some gals who had picked up some other pacers also under a time constraint.  Gordo got to the checkpoint tent and inquired if Sean had passed through yet.  There was no record of him in the computer yet.  He waited around for a few minutes and then went back to the table only to notice that Sean’s number was hand written down.  He immediately investigated and the lady told him that he had come in and was already on his way out.  Gordo made a mad dash and headed to the trailhead, literally catching up to the back of Sean!  I know that seeing Gordo gave Sean a huge boost after not meeting his crew (still thankful that Allison was able to help fill in).

WEATHER – Race day weather began in the 30s and reached the upper 60s/low 70s with a mix of overcast and sunny skies.  Around 1-2 PM yesterday about 3-4 hours after the race, just after Paul and I were dealing with the AAA arrangement, inclimate weather started rolling into Leadville.  It rained and even had some fine hail coming down.  By the time we got back to Twin Lakes (~25 mins from Leadville), there was a thunderstorm over top of Mt. Elbert, which is just above Twin Lakes and 2 peaks from the Hope Valley Pass.  That kind of weather would have brought drastic change and dangerous conditions to the runners and pacers.  So thankful that this did not happen!

The last stretch, as a pacer:

I mentioned that Sean was hurting all over, but mainly in his quads and hips.  He said that really started after the intense elevation gain and descent from Twin Lakes to Winfield (up and over Hope Pass) and then back to Twin Lakes.  (He thinks incorporating more weight lifting and downhill training could have helped – I say it would’ve been tough no matter what!  I think trekking poles would have been worth bringing.)  Up until this point, he was really strong and holding an average between his best and worst case time estimates.  I enjoyed witnessing the impact of pacers and was amazed at how many runners did not have at least one – hence why there are several volunteer ones that show up at Winfield each year.

Gordo was the main pacer for our crew.  He totaled around 27 miles of the 50 inbound mileage!  (Winfield to Twin Lakes – 10 miles, Fish Hatchery to Mayqueen – 10 miles), Mayqueen to Tabor boat ramp – ~6.5 (guessing, not a checkpoint), PLUS the extra 1-2 (off course) miles to find Sean in Winfield!  Sean only had 13.5 miles to do solo.  I’m so glad for that.  By the time I paced with Sean, he really did not want to move anymore.  His body was ready to be done, but his willpower to finish was determined to overcome his discomfort.  I tried to keep talking about everything to distract him from how he was feeling.  Like I said before, reading your emails and texts was a huge encouragement tool.  I also tried to reach out some to those who we passed or passed us, too.  Some runners were down to a snail pace or were stopping for breaks.  It was great to see the role of pacers – one was carrying a cold Coke to have his runner get a boost.  Others were packed down with their runner’s gear to lighten the load.  It was an amazing display of teamwork!

Despite him not wanting to have to walk as much of the last 1/4 of the race, Sean hung right in there with his time!  He was walking briskly enough that he still finished right between his best and worst case time estimates!  He was 261out of 497 finishers – (approximately 1,000 registered in this 31st annual event).  Way to go, Sean!!  (And I’ve got to tell you there were some super fit, hard core gals in the race too!)

After some sleep and rest, Sean chose a quaint little Thai place last night for dinner in Leadville.  The service was really slow, but there was no doubt that everything was freshly prepared.  We were convinced that the waitress was also the cook!  Anyways, I’ve attached a picture of Sean’s fortune cookie message.  I can only imagine the realm of prediction to that!

Lastly, Sean assures me that the Leadville look – rugged hair and beard – will probably not make it back to PBO.  He even found a master shave barber in Denver, but that doesn’t seem to be working out scheduling-wise.  I suggested the barber here in downtown Leadville for an extra authentic effect!  🙂

Today, he is moving around quite well and taking Ibuprofen.  I am treating him to an outing at the hot springs in Buena Vista today.  While none of us packed a swimsuit, we figured we can make do with some running clothes for a nice warm soak!

Signing out from Leadville, 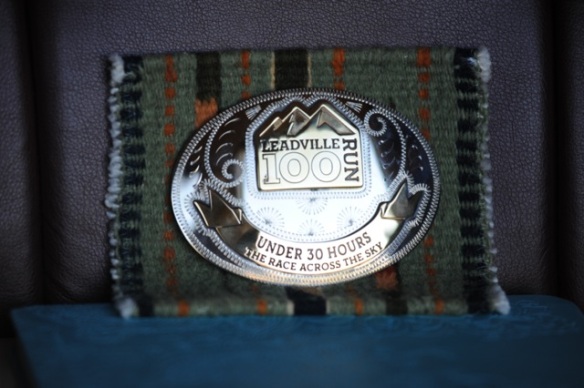 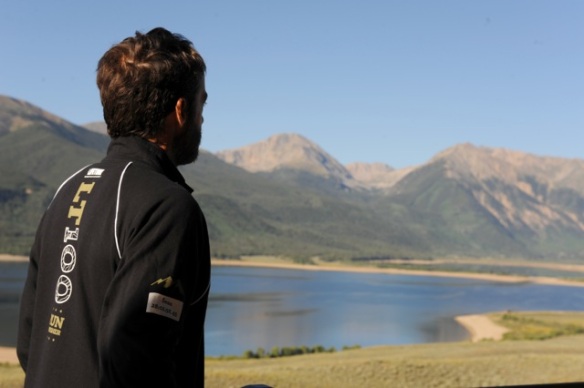