I had surgery on 9/7/2005… The Doctor had wanted to do a lateral release last August, but I decided to go the PT route. But it became obvious that I wasn’t going to get back to the levels I wanted to be at — i.e. to be able to train for and compete in 2 to 3 day adventure races. Maybe I’ll never get there but I at least needed to try to improve the current situation.

I asked the Doctor to do an exploratory scope with minor clean up, but that if he found anything major — i.e. anything that would take months of recovery, to not do it. Anything minor, meaning 4 – 6 weeks of recovery, he should do.

So he went in and this is what he found. The most surprising thing is the upper left picture, which is a “gap” in the tissue of the knee underneath the supra patella pouch. This gap was tethered to several places, perhaps to keep it from separating more. The Dr. thinks these tethers were limiting the patella’s movement, so he trimmed off the tethers and got rid of the gap. He’s fairly optimistic that at least this will help a fair amount. I may still need an LR some day — only time will tell. The other pictures are standard grade 2 chondromalacia, and he cleaned all the loose ends up, etc. 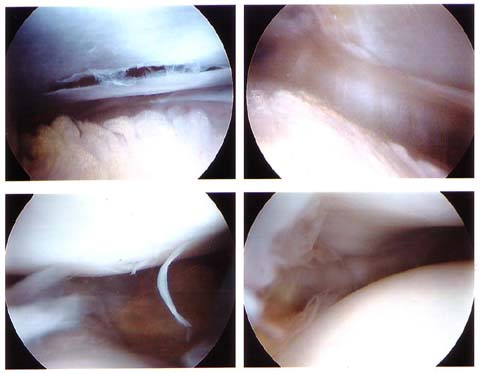 Here are the “after” pictures where everything is cleaned up. 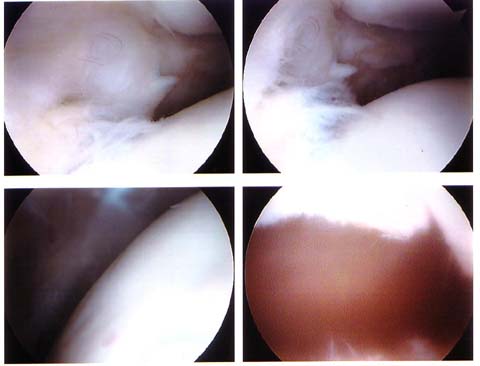 “Smooth as a babies bottom…” Well, not quite. The resolution of this image isn’t quite there but the lower left picture does show a bit of a bumpy surface.