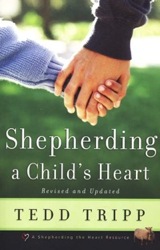 Parenting by The Book. John Rosemond.

I finished these books quite some time ago — at least 6 or 8 weeks, and they’ve been sitting on my desk ever since, waiting for me to blog about them.  I actually started Shepherding a Child’s Heart a long time ago, and got about 70% through it, when it drifted to the bottom of my reading pile for some reason.  Then Kelly brought home Parenting by The Book, and after reading that, I wanted to go back to Shepherding…

Because it has been a while, the books are not as fresh in my mind so there may not be much depth to this post.  Let me start by saying that I highly recommend both of these books to any Christian parents.

I used to read Rosemond’s weekly news paper column, and read a few of his books a while back…  See my old reading notebook here.  I always liked him, but none of his books were Biblical.  Just Old-Fashioned.  (And there is nothing wrong with being old fashioned in terms of parenting in my book!)  It was quite surprising to read this new book, which is 100% Biblical, after reading all his old stuff, which never even mentioned God, that I recall.

I also read “Don’t Make Me Count to Three,” by Ginger Plowman, which was based on Shephereding (though for some unknown reason, I don’t appear to have a blog post on it).  Tripp’s book is better than Plowman’s, in my opinion.

The basic premise of Shepherding is that we don’t want to utilize behavior modification to improve behavior, we want to reach the heart of the child — i.e. appeal to the conscious.  When the heart is right, good behavior will follow.  And Rosemond says that humans are not subject to behavior modification techniques anyway, which appears to be true to me, after parenting Riley for 6 years.  🙂

In some ways I like Parenting by the Book better, but I think they should be combined.  Shepherding was much more about corporal punishment, followed by discussion/communication, whereas Parenting talks about different forms of punishment (including corporal).  Both are big on consistency in parenting, in terms of what actions are accpetable and what are not, but likes to vary the discipline  — in a way to “shake things up” even more for the child.  (Be a bit unpredictable in what the consequences are. This is somewhat harder for me to do, but maybe that will change as the kids get older.  At 3 and 6, I think it would be somewhat unfair to be too unpredictable.  But he says again and again, life is not fair.  🙂  )

Both talk about success being about the person’s character, not about material and social success, but that our current culture is all about the later two, even if we say we want success for the former as well.  He gives examples about this over and over, suchas having a 3 year old be able to recite the alphabet (so they will do well in school, so they will get a good job, so they will have material success), but that we don’t have them work on simple manners.