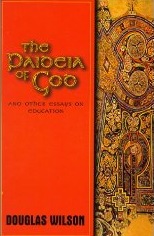 This is a book of 9 essays by Douglas Wilson, a man I have grown to respect more over time as I have read more of his works (several books and his blog).  He has strong insight and a sharp mind, and is of course worth reading if you are endeavoring on starting a Classical Christian School. Below I’ll say a thing or two about each essay and include some quotes that stood out for me here and there.

This will be a good essay for me to review before I need to get up and do any public speaking about what HRCA is all about.  It is really about the culture…  There was great point about our culture’s lack of personal responsibility and accountability, and our full flight away from hard work.

This one talks about the rampant rise of students with “disabilities” such as dyslexia, ADHD, ADD, etc. over the past few years.  I don’t know much about these, and Wilson’s stance seems pretty strong, and definitely against the mainstream.  But I do tend to agree that the use of Ritalin and other such drugs is way over prescribed.  He argues that discipline can solve the problem for many of those children.  He talks about how and whether schools should offer services to those with disabilities, which is something we at HRCA are faced with.

Finally, he had a good point about “parity of results.”  That is something a school should not strive for, because everyone is different.  For example, not everyone is great at math.  Those that are great should get A’s, those that struggle should not.  And parity of results is a recipe that is often followed at many modern schools.

A lack of discipline will spread from the students to the staff, and it will not be long before the school is filled with teachers and students, each providing cover for one another’s laziness.

This essay also has a great section on the difference between discipline and punishment.  To briefly summarize, punishment is interested only in justice, whereas discipline is interested in both preparation and correction.  Positive discipline does not presume that anything has been done wrong — it teaches the proper work ethic and study habits.  Negative discipline IS a response to wrong doings.

… while correction may be absent for a self-motivated and well-behaved student, discipline is never absent.

A Brief Statement Against Vouchers

Not much to say on this one except that it argues that if a “private” school accepts vouchers (government money), it won’t be long until said school starts suffering government intervention.  (And I would have to agree!)  As a start up school struggling with our budget, in a community where many see the cost of private school as too high, it would be great to have a source of funds to get more kids into the school.  But not if the source is an institution that will begin to try to have more and more say and control over what we are doing.

This essay has a (very) brief historical synopsis of “Reformed” and a little on what it actually means, but if you are looking for more, I would recommend RC Sproul’s “What is Reformed Theology?” What is most interesting is the following quote, which matches up quite well with at least two of the core group of Haw River Christian Academy (including me):

. . . many of those who are involved in starting up classical and Christian schools are on their own pilgrimage.  They do not have any settled doctrinal convictions but are unsettled by that fact.  They feel rootless and unequipped to teach their children.  They have begun the process regardless, and they have constantly come up against what may be described as a fundamental theological reason why their studies seem so fruitless.  They are trying to be faithful but cannot seem to get any traction.  I have seen numerous such individuals who have begun to investigate Reformed theology precisely because their previous theology (or, more likely, lack of theology) provided an inadequate foundation for the kind of eduction they wanted to provide for their children.

At first I thought this essay was all over and off base, but it has grown on me.  When I reached the part about descriptive vs. prescriptive grammar, I had to chuckle.   See #7 here.  The main argument here is that if we abstract things too far, whether it is in quantum physics, grammar, logic, or just about anything, we can lose a touch of reality in what we are studying and easily reach false conclusions.  I tend to agree to an extent, but there is a time when such abstractions can help us to solve real world mysteries.  So I think it is best if you are just aware of the pitfalls of abstraction, but not be afraid to abstract.

A Brief for Greyfriars Hall

An interesting look at why the local church should participate in the education of its future leaders of that church, rather than expecting leaders to come in from seminary.

A quote he had from Charles de Gaulle:

The graveyards are full of indispensable men.

A look at why Evangelical colleges are no longer evangelical…

Classical Learning and the Christian College

Another essay on what is going on in most colleges and how they have strayed, though this one seemed to wander here and there as it went…

Anything the world can do, we can do five years later.

It did have a great little section on why studying history and the classics is important — namely that the Bible can not be well understood if you don’t know anything about the historical context of when it was written.  And I personally would add that there has been a “great conversation” throughout the history of the west in literature, with great minds digging deep into faith, philosophy, etc.  I also think that classics from other cultures are important to read too!  🙂

1 thought on “Paideia of God, And Other Essays on Education. Douglas Wilson.”