The Bear was the 1st road race I have done in years, but what better way to come back than a 5 mile race that climbs 1500+ feet and finishes at the top of Grandfather Mountain?  (I have mostly not run road races as I almost exclusively run trails these days, and a few years of knee problems have meant not that much running anyway.  The knee is getting better and better and I plan on attempting a couple of longer trail runs and adventure races as time permits.)

The profile was a little intimidating: 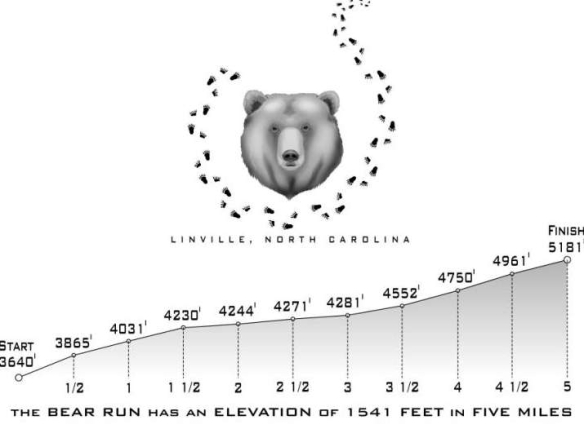 It was raining off and on most of the day, and my sister Kerin kept saying she wasn’t going to run.  About 10 minutes before the start she finally said she would, so Kerin, Kim (another sister) and I headed to the start about 400 meters away.

My race plan was simple — try to hang with my sister Kim as long as I could.  When the gun went off, Kim took off, and I thought the pace was going to be way too much.  She has gotten really fast!   I was able to watch her slowly pull away, until she was 30 or 40 meters in front.  But around mile 3 I realized she was coming back in, and I passed her around mile 3.5 or so.

The last mile got really steep, and it felt like a Tour de France finish at the the top — the crowds were cheering loudly and closing in on you and we were channeled through all the people to the finish.  We also finished in a cloud, so you couldn’t see more than 20 or 30 meters around.  I crossed in just under 50 minutes…  Kim came in just a minute later, and we walked down to meet Kerin and run her in.

The only real problem with the race is that without a personal cheering section this year (due to the rain) we had no way down other than to wait for a shuttle.  We missed the first two out, and there were only two buses, so we had quite a wait.  Finally a “box truck” (aka a short u-haul truck) offered to take us down, and about 30 or 40 of us piled in.  It was quite cramped!  The highway patrol drove up as we were about to leave, but he gave us permission to drive down like refugees, and eventually we made it down to the bottom.

It was a fun race though I don’t know that I will do it again unless anyone else I know wants to race it.

I used the free version of RunKeeper on my iphone to get the following GPS info… It was not that accurate on overall distance, off by about 10%, but the elevation gain is pretty close…  All in all a fun tool to use when working out. 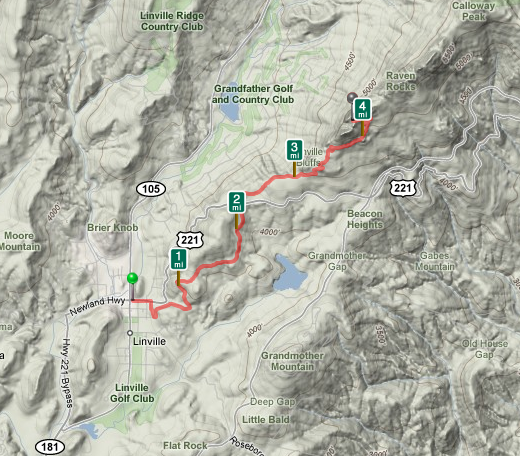 (I think Run Keeper is off on my speed towards the end!  It got very steep, but I was not crawling!  And the other information it gives (not shown here) shows that’s where I likely lost GPS signal…)