I posted this to daily mile, but thought I’d cut and paste it here.

Extremely sloppy and muddy, cold and wet, but great fun! 🙂 It felt really good to push myself hard in a race as it has been a while. 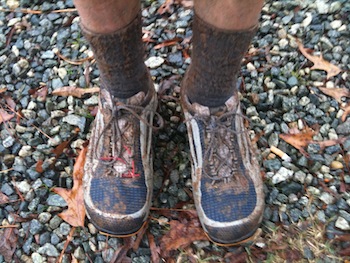 I wish I had know the course a little better… I went out pretty hard the 1st 1/2 mile as it was on the road, and with a mass start with both the 7 and 14 miler racers all starting, it was crowded. I wanted to hit the single track without too many slower runners in front. While there was some single track early on, there was also a lot of horse trails that were wide enough to easily pass (or get passed!), so I could have gone a little slower to start.

The fast start meant I did have to slow in the middle, but I picked it up around mile 5. The mile markers were a little off, as they kept showing me just under 10 minute pace, and I knew I was running faster. And the last mile I ran in < 5 minutes. 🙂 So they made up for it.

The GoLite trail shoes were awesome in the mud, as I knew they would be. While some runners looked like they were on ice in the slick clay mud, I never slipped at all. These shoes have huge knobs on them — almost like cleats. Should do well in the snow and ice too!

All in all I am happy with a 9 minute pace on these trails in these conditions. The single track mountain bike trails were very tight and technical, so tough to run fast on, while the horse trails did allow me to open it up a bit. I could not open it up on the downhills like I would normally do, due to the slickness of the mud.