I was just ten days past my Half SCAR Plus run, recovering nicely, trying hard not to think about what might be next, though the thought of a Fall 50 miler (running) kept creeping into my mind, when I received an email from my old Florida teammate Will, from team “Are We There Yet,” that simply read:

“I am on a team that is paddling a dragon boat in the Missouri River 340 at the end of July. If we finish it will be the world record for longest race in a dragon boat. We lost a person. There are some folks in line to take the spot, but there is probably a chance for another opening. Are you interested?”

Do you know what my response back was? “I don’t even know what a Dragon Boat is!”

To which he responded:

“It is, for our purposes (even though not technically accurate), a big, ceremonial canoe that, in its most common form in the US, seats 20 paddlers in 10 rows of 2, with a drummer in the front who helps with timing, motivation and communication, and a steersperson in the back who steers with an oar through a lock on a steering arm. So it would be like canoeing with a lot of teammates, except that you only paddle on one side at a time. We will be switching sides periodically.”

My first response was “No!” I have enough experience in 2 – 3 day adventure races with 1 to 3 other teammates to understand how difficult team dynamics can be with that few number of people – who could imagine what it would be like with 20? I also like the aspect of adventure racing that allows you to change sports, from running to biking, or paddling to running, etc. Doing one sport for 48 hours (plus or minus), did not sound fun at all. I also thought about the utter chaos we would have at check points — trying to re-supply 21 people in a short amount of time seemed to be an impossible task.  And I hate wasting time at check points!

But, the two words “World Record” kept coming back to me. So a couple of days later, I let Will know, who in turn let the team captain, Christina (later named the Imperial Commandress), know, and a couple of days after that, a spot opened and I was on the team.

And best of all, we’d be raising money for the Shriners Hospital of St. Louis.  Please consider donating here to this cause here.

Here is the logo from this year’s shirt, which shows the map of the course.  We’d be paddling from Kaw Point in Kansas City, all the way to St. Charles.  The other points on the map would be the check points where we’d have to check in with race staff, and where we could stop and refuel.  We were also allowed to “fly by” these as long as our ground crew made visual contact with us to check in for us. 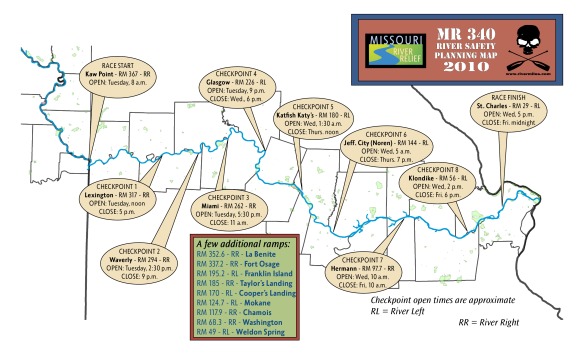 Training
Wow, here I am entering an extremely long paddling race, with what appeared to be a serious paddling crew, and I’m thinking, “I’ve only paddled once this year, and that was to take the kids out on the canoe for an hour!” Hmm, how to get in shape in less than 5 weeks! Well, I had a good aerobic base from the ultra run, and I had been keeping my strength training up so I felt like I had a decent strength base as well. What was left? Paddle, paddle, paddle! And paddle some more!

Looking back at my training log, it looks like I was able to get in 8 rowing specific workouts, with canoe paddling as long as 3 hours on Jordan Lake, though most were in the 90 – 120 minute range. I had to get up at 5 a.m. a few times to fit in these kind of time commitments around work and personal life schedules. That is not a whole lot of paddling!

Here is a photo of the dragon boat in action… Our team was able to get in a couple of training runs on it, though getting 16 – 20 paddlers together is tough schedule wise!

Postponement
About a week before the race, we got a clue from the race director that the race would likely be postponed. The Missouri River was at or above flood levels, and many of the check points would be inaccessible. And the river could be dangerous. And then it happened. The race was put off until 8/24.

There was a mad dash scrambling to put the pieces of a team back together. Many members had commitments in August such as school, work, etc., but a core group remained, and we eventually were able to secure a team with 20 people on it — leaving one seat empty.  (We later found that one empty seat was essential to allow the 3 steers the ability to rotate on the fly in a safe fashion. If that back row and been completely full, it would have been much tougher to make changes!)

You would think that would be a good thing for someone like me, who had very little paddle specific training in place. But I had an extremely busy time right around then, with a couple of trips planned, and I was only able to get in three more paddling workouts in!

Travel
It came time to travel west to Kansas City. I took an early morning flight to DFW, where I hooked up with Will and Ryan. I had not seen Will in several years, and was introduced to Ryan. Our DFW to KC flight was delayed about 40 minutes, as a seat belt was broken. On a half empty flight, that should not have caused any problems since you can just move someone to a new seat — but the broken seat belt was the pilot’s! That delay was a bit concerning as we were supposed to meet the team at the race start and take the boat out for a quick practice, before the mandatory safety meeting, and now we were cutting in to that time. But we got picked up and went straight to the start, where we quickly changed clothes, where introduced to everyone, and jumped in the boat.

Practice
We paddled the boat as a full team for the 1st time for about 45 minutes. (Actually, I think we were missing one or two people…) At this time, I hate to admit it, but my realistic side was kicking in… Or, perhaps more accurately, it was pessimistic side! Our paddling was awful — we were not synchronized in any way, and there were several in the boat that had paddling strokes that left a lot to be desired. One of the team mates in front of me happened to be a very accomplished adventure racer, ultra-runner, and paddler, and we started talking about attrition rates. We both guessed as high as 20-25%, which would be 4-5 paddlers. A boat as big as that would be difficult to move quickly if we dropped that low. And while we never openly discussed the particular people that we individually thought would not make it, I’m sure we were both thinking about it. This turned out to be a great lesson in “Don’t Judge a Book by its Cover,” because I was dead wrong. The entire crew made it to the finish, and some that I thought would be weak, turned out to be strong.

Dinner
Doug, one of the paddlers, who lived a couple of miles from the race start, had opened up his place to several of us, which was very generous considering he didn’t know most of us at all. I rode to his place with Christina, and then the three of us, as well as Doug’s wife, went to a casino buffet dinner, where we (well, me, at least) stuffed ourselves silly. 🙂 Apparently, river boats were awarded the right to offer gambling a long time ago, and the law was written such that as long as there is a little water between the land and the casino, that’s legal. So the “boat” we were on was a building with a little bridge over a 5′ span of water.

Pre-race safety meeting
We headed to the safety meeting, checked in, and were briefed by the race director on what to expect, the rules, etc. We heard “high fast water” about 100 times during the safety video — while the water had certainly dropped since the postponement in July, it was still very high. And fast. “Drink!” (He had suggested making a drinking game out of the video… 🙂 )

Final Preparations
After the meeting, I went to the grocery store with Eric and Michael for some last minute food grabs — for me that included famous amos cookies, some mixed nuts, etc. Then we headed over to Doug’s, where the 5 racers and 1 support crew member made our final preparations. There were a lot of zip lock bags and food flying around. We finally got to bed around 10:30 or 11. I used my buff to cover my eyes since not everyone was quite ready to turn out the lights when I was — is there no end to the uses of a classic buff? 🙂 I love mine!

Wake-up call
I woke up about 5 a.m., before the alarm went off, and started to get ready. It had not been a great night of sleep, but certainly wasn’t terrible. Just like the night before most races, I’m always anxious and wake up a few times during the night, only to check the clock and realize there is plenty of time. Doug’s wife walked Michael and me to a nearby cafe, only to find it was closed. 😦 I really wanted needed my coffee. Then she drove us a bit further to a very nice grocery store that had a large breakfast buffet. And coffee. Now I was ready!

We had to make two trips to the start with all the paddlers, crew, and gear, but we were there in plenty of time to put everything together for the start…