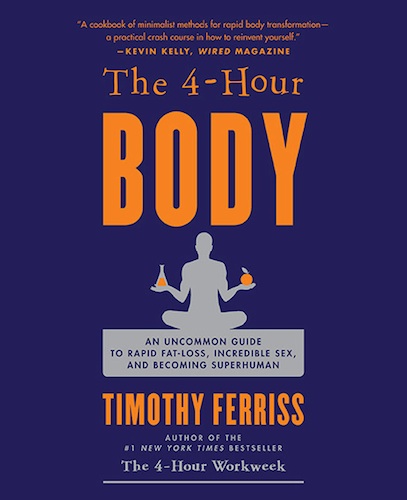 When I first started to hear the buzz about this book, I really was not interested.  I had a feeling I wouldn’t like Tim Ferriss — the title of his first book, which was a best seller, was “The Four Hour Work Week.”  That kind of put me off, for some odd reason.  And while I still have not read that book, I understand now that it s more about time management than actually working just four hours a week, so that changes my initial uninformed thoughts.

Anyway, back  to the buzz.  I really wasn’t interested, even though the original, working title was “Becoming Superhuman.” (Who’s not interested in *that* kind of book?)  But the publishers wanted to play off the success of his first book.  What really got me was the interview Tim did with Robb Wolf and Andy Deas on the Paleo Solution, when Tim started talking about “pre-hab” and the exercises he used to find and correct imbalances in his body.  That has long been a fascination of mine, due to what I already know are weaknesses (imbalances in strength) but weaknesses that I’ve found hard to correct.  It is my assumption that those imbalances are what causes a body to be injury prone — thus the notion of “pre hab.”

So I broke down and bought the book.  It is best to view this book as a reference book.  Read the 1st two chapters or so, and then pick out what you want.  For example, there are chapters on losing all kinds of weight.  I don’t need to do that.  There are chapters about putting all kinds of muscle on, and I also don’t need to do that.  There are chapters on going from a 5k to a 50k in twelve weeks, which were quite interesting to me, though not that useful (since I have already run that distance).  There were chapters on holding your breath for really long periods of time, which were interesting.  (Way back when — when I was a swimmer — I held my breath for 2 minutes 20 seconds.  On my 2nd try with Tim’s method, I hit 2:30!  I’m sure I could go over 3 with a few more practice attempts.)

Tim basically was a self experimenting machine for the past 10 years, and this book recounts his successes (mostly, with a few failures), with all kinds of crazy things that are much outside of conventional wisdom.  I myself find “CW” is often not right, so it was definitely an interesting read, though I’m not sure it is for everyone.  Definitely on the geeky side of things with the science behind the experiments.  (He talks about why new technology is often out of reach of the masses, much of it due to economics.  The cutting edge scientists, with new methodologies and treatments, are maybe 20 years ahead of the mainstream.  They are a limited resource, so it is those with money that get the treatments.  Typically professional athletes and hollywood stars. It takes time for these technologies to trickle down.)

I’m still playing with the pre-hab movements, of which he only gives 4 — the 4 that will have the best effect on the wides audience — and the chop and lift and single arm standing dead lift definitely show what I already know (my right side, especially the hip stabilizers, is week), but I am quite intrigued by having a real “Functional Movement Screening,” done which looks for imbalances and gives specific exercises (beyond the main 4 that Tim discusses) for each such imbalance/weakness.

I didn’t know there was such a thing as a trailer for a book, but there is, and here’s 4hB’s trailer:

A much longer (and better!) review is located here.