Ok, I better write something before too much time passes… But with Kelly having written the race from her perspective, there’s not much for me to say about the race itself.  Her account was much more interesting, as I just ate and ran.  🙂

First, I have to give huge thanks out to Kelly, Riley, Reece, Dad, and Gordo, for spending 30+ hours allowing me to achieve my goal of running (finishing!) Leadville.  Without them, it would not have been nearly as fun and perhaps not possible.  (I would have had to run unsupported using drop bags with no pacers…)   And not just 30 hours, but the time surrounding the time in Leadville too.

And beyond race day, Kelly, Riley, and Reece put up with a lot of training for me over the past 6 months.  While I did my best to keep up with all family commitments, and scheduled my long runs to be as least impactful as possible, I was still off running an awful lot.  (BTW, this account of “why do you run so much” is a fantastic read.)

Pb in the future – breaking 25 hours?

Next, I’d have to say that right now Pb is not high on my list to run again (but that’s not to say it won’t creep back up there!).   It’s a beautiful course, a great atmosphere, has great history and tradition, and is tremendously challenging.  But I think the race has gotten too big/crowded, and the resulting issues need to be addressed before I’d consider going back.  (I won’t address those issues here, they have been addressed in many other places.)

BUT, look at the splits below:

Training – not sure I could find more time to run, or if I’d want to.  But all I did the last 6 months was run.  I had a few 60 mile weeks, which is not a lot for ultra runners, but is a lot for me!  No weight lifting, no biking, etc.   Lots more work on the legs — lunges, squats, etc., would have helped.  More downhill running would help (my legs were shaking coming into TL1 at 40 miles, and the 2nd climb up Hope on the return took a lot out of me…)  Here are my weekly running miles the weeks leading into Pb…  The 65 in week 18 was the week of the NF50 in NY and the 96 on week 22 was the week of the 24 hour where I ran 87 (and stopped just over 19 hours in, in order to be able to continue Pb training…).

Some random photo I found on another blog — with me in it!  🙂 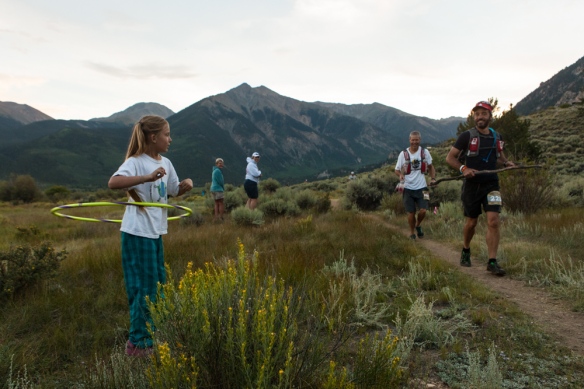 Shoes – Suacony Virrata (road shoe) the 1st 40, Alta superior the next 20, Hoka Stinson the last 40.  This was all fine.  My feet were about done in the road shoe around mile 38-39, and I was ready for the Stinson at mile 50 but my crew was not able to get into Winfield (assuming Gordo would have carried another shoe across Hope for the river crossing).  But this was all fine.  The only thing I might consider in the future is to *start* in the Hoka, but I’d still change shoes at TL1 and TL2 to ensure dry shoes the rest of the race.

Nutrition – base of vfuel and diluted grape juice (1/3 juice, 2/3 water).  Mixed in some perpetuem.  The hard boiled eggs and nut butters, while they worked in training, were not great in Pb.  I think it was the fact that the 1st hard boiled egg I almost choked on, and the 1st nut butter I had was plain almond butter and was very dry.  The almond butter + honey, or the hazelnut + chocolate, worked better.  I also used the broths and noodles at the aid stations, ate some ptotatoe chips here and there, a couple of small boiled potatoes, half a hamburger at inbound/hatchery, etc.   Nutrition was pretty good throughout the race — there were times I just didn’t want to eat, mostly on the climbs up Hope and Powerline, but I was always able to force a vfuel down and those seem to sit very well in my stomach.

Gear:  Love the new Ultimate Direction AK pack!  Used under armor compression shorts under go lite shorts the entire race, and a 200 weight short sleeve ice breaker body fit T.   Had arm warmers and a hat.  I did get chilly after midnight, even with a 320 weight icebreaker “sweater” on, and had to borrow Gordo’s down jacket a bit.  Started in injinj toe socks for the 1st 60, then switched to a dry pair of thin smart wools.  Lights – might consider a new set up in the future — mine are now a few years old and it shows — lights have come a long long ways!  Used bodyglide and runners guard for chaffing, which was fairly minimal.  (A lot less sweat in CO than I’m used to on the East Coast!)

Nothing really jumps out as not working.  Even the wood sticks I picked up to help me over Hope Pass were mostly ok, though I’d consider trekking poles in the future, at least for the big climbs.

4 thoughts on “Leadville – My Thoughts”