Running up Calloway is my favorite “run,” with “run” definitely in quotation marks because if I can average around 18 minute miles, I’m pretty happy.  🙂  Whenever we are in the Boone area, I try to hit this trail.  In fact, one year I summited Calloway 12 tiimes!

When I heard Tanawah Adventures somehow got a permit to hold a trail race here, I was astounded.  But excited!  The race would be The Profile Trail to the summit of Calloway Peak, then down the back side using a combination of Daniel Boone, Nuwati, and Cragway, then back to the top, and back down.  A total of nearly 15 miles and 4500′ of climb and descent.

It would be my 1st race since the ankle injury back in May.  I had previewed the course three weeks prior and came in at 3 hrs 53 minutes (definitely trying not to push too hard).  I thought anything under that would be good, as I thought my preview might not have been the full course.  Turns out race day would stop at the old trail head, about a half mile short of the new one, but would also start about a third of a mile further from the new trail head, so nearly a wash.

The first thing that surprised me was that we’d be starting in 3 waves, with your bib number being assigned based on your ultra sign up ranking.  I came in at 57 out of 150 runners, so did not make the 1st wave!  That told me the level of runner in this race was going t o be up there.  And instantly out of the gate people were flying towards the trail.  I wanted to get towards the front of my wave and pass a few of those in the 1st wave, as once you hit the single track and climbs, passing would be a lot of work.

I’ll keep it short and just say I ran very well, but was amazed at how well so many other people handled this brutal course!  I came in at 3:28, 25 minutes faster than my preview time, and much faster than I thought I could run it.  So I was happy.  (I think I was 47th so I moved up a little!)

Here I am coming down the backside.  Pictures never do justice to the steepness — but trust me this is steep! 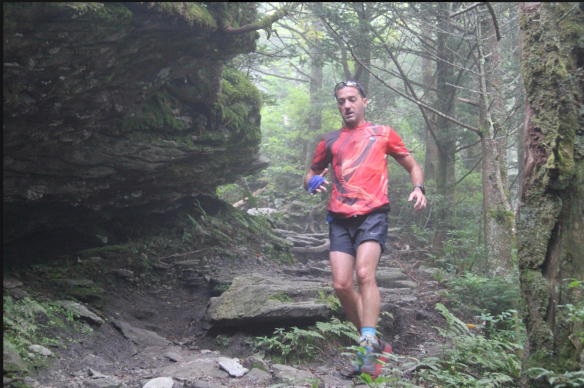 As I was waiting at the finish I heard from Kelly that she had slipped and hurt her knee.  Eventually she made it to the medics and they wrapped her knee and gave her a 2nd pole to come down on.  I ran up to the car, grabbed some warm clothes and food, and headed out to meet her.   I then came in the last 1.5 – 2 miles with her.  Turns out she tore her ACL — completely off the femur — but was still able to finish!  But she will need surgery.  😦

Here are my lap times: 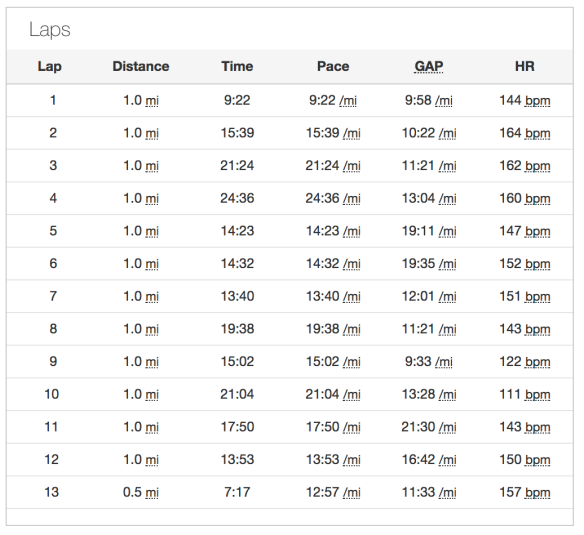 And Strava race analysis — a little faster on the 2nd half, but I think the climb is a little easier on the backside. 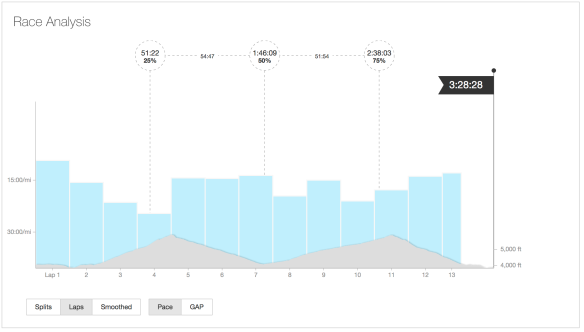