I think things may be getting out of control. I have way too many devices and too many wires for my home network. At least I recently bought a shelf and moved it all out of a small cabinet, where it was getting too hot and way to cramped to work. Any time I needed to add a new cable for a new device, it was a nightmare trying to figure it all out. So I moved it all out and used velcro bands and twisties to keep the cables as short as possible. It’s still somewhat of a mess wire wise, and it would be good to get several 1′ and 2′ etherent cables.

Here’s a quick picture I took with my new logitech quickcam fusioin that I use for web conferencing/video chat: 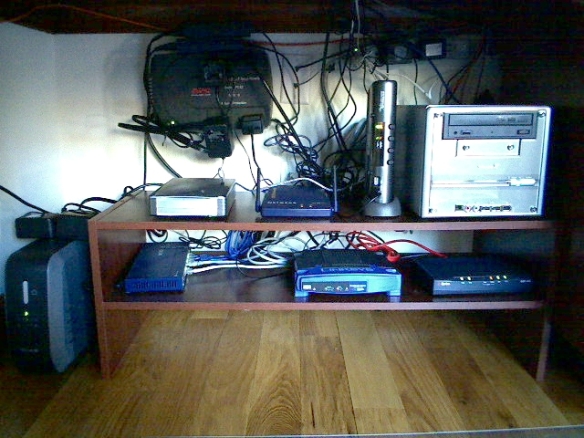 And descriptions for each device:

At least there’s a little more space. I’d like to add another shuttle type (small form factor) PC to run linux on, and I recently ordered a LinkSys NSLU2, which I will run linux on instead of the standard linksys firmware. Once you put linux on these, affectionaly known as slugs, the skies the limit. I plan to run an itunes music server, and ftp server, ssh, etc. I won’t move my things that need more stability that DSL here, such as my web server, mail server, etc. And then I’ll need at least one more, if not two, USB 2.0 hard drives to connect to the slug. So at that point I pretty much will be out of space.

What needs to happen is all these home devices need to be standardized to fit in a small home sized rack. 🙂