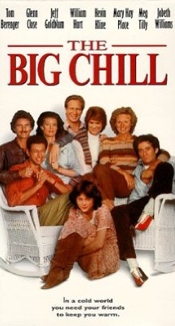 The Today show was running a series of anniversary/get-togethers on old movies, including Airplane, Footloose, and the 25th anniversary of The Big Chill.  So after seeing that, I wanted to see the movie again because it had been years and years and I really didn’t remember it all that well.  The movie is good, but there are a lot of drugs and some other things that go on that I don’t care for that much.  Maybe I’ve changed as I’ve grown older, as I don’t recall feeling that way when I watched it way back when.  The movie is still worth a watch,  as the thought of a close friend (from college) dying unexpectedly is sobering as we get older.  But most of the movie deals with that at a fairly superficial level while spending more time on less pressing issues.