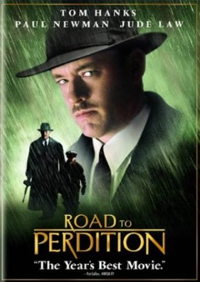 I happened to see the 1st couple minutes of this flipping channels and decided to record it and watch it later.  I literally did not know anything about it going in, but with the cast including Tom Hanks and Paul Newman, I figured it had to be pretty good.

In case you didn’t know, the definition of “perdition” is:

It was one of those movies that is not super cheerful!  But the acting is good and the story keeps you engaged.  Lots of twists and turns though most of them were fairly predictable.

Natural law. Sons are put on this earth to trouble their fathers.

Let’s hope that is not the case with Reece-man!  🙂