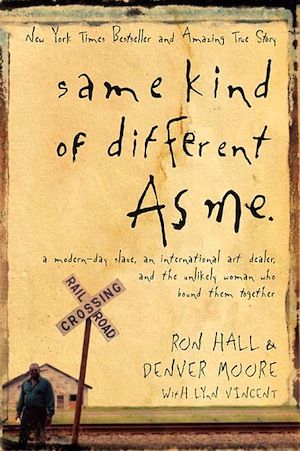 This is another example of how dangerous the Kindle is!  Being able to sample a book, a book I probably would not have glanced at a 2nd time anywhere else, can get you hooked!  I saw this mentioned in blog post by John Piper, where all he said was:

If you want to crawl inside the possible world that opens when a dirt-poor, illiterate, former-share-cropin’, homeless 50-something enters the life of a swank, upscale, southern, Christian art dealer, read Same Kind of Different As Me. These two men tell their increasingly interwoven stories in alternating short chapters that kept me coming back night after night.

So I downloaded the sample, and was hooked a few minutes later.   It was really a great story, well told by the two men who are completely different and write in completely different ways.  Ron, the “rich art dealer,” really strikes a chord with me personally, in how he shows how easy it is to give charitably, but in a distanced manner where you don’t have to risk getting too close, to personally involved.   How true that is!

And Denver is full of wisdom, yet is a person you would never expect it from:

1 thought on “Same Kind of Different As Me. Ron Hall, Denver Moore.”