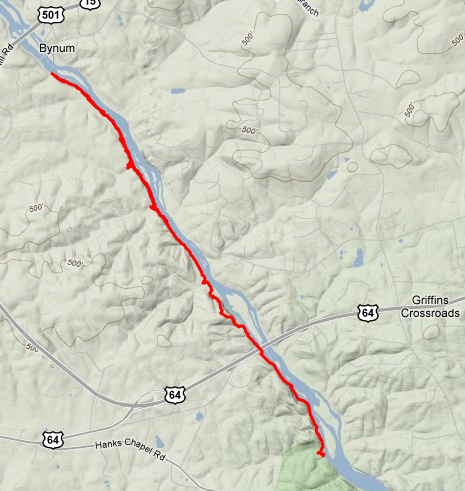 I’ve wanted to attempt this run for a while…  Turns out it is much more of a scramble than a run, as there is not a whole lot of trail.  Lots of bushwhacking, bouldering, and even a couple cliff climbs.

Here is what I wrote on Daily Mile:

That was much harder than I thought, even though I have done much of the southern sections of this route before, though not all at once. I had not been on the last 2.5 miles or so of the north part before the turn around at Bynum…

Lots of bushwhacking, a few cliff climbs, bouldering. In fact I’d guess that less than 35% of this is on a real trail. And once you pass the power line north of 64, there is NO trail.

I made it to about a quarter mile south of the old Bynum bridge, and I could see the dam at 15/501. But I turned there because I reached someone’s personal property. There were yellow signs showing the “state park” land but with the water as high as it was, I didn’t feel like trespassing. Never know who might pull a shot gun on you! (Next time I’ll just jump on Bynum Beech Road, which I ran next to for a bit.)

I experimented with Chia “fresca” as my only fuel. Two 20 oz bottles of 3-4 TB of chia seeds, a little lime juice, and a little honey, and the rest water.. I will need to try this again. I felt pretty dead by the end, but I can’t tell if that was the course beating it out of me or if it was Chia not fueling me as much as my normal fuel, pPerpetuem.

About 9 minutes slower on the way back, but some of that was route selection. Instead of going “up and over” I went down by the water and with the water level it more bouldering and climbing than I expected!

Looking forward to trying this on the “east” side soon!