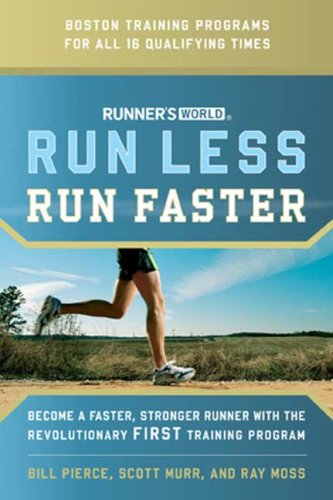 After coming back from Boston, where I watched my Dad and sister run the marathon, I realized I had caught the Boston bug…  Even though Dad can get me in without a qualifying time, I had to check the what my BQ time is to see if I would have a chance.  For me at nearly age 40, I’d have to run a 3:20, or 7:38 minutes per mile for 26.2 miles.  I can run that now for 5 miles, but adding more than 20 would be tough.  I’m also torn, as I don’t really enjoy road running that much, but instead love the trails and right now want to concentrate on trail ultras..

Either way, I had heard about this book so I thought I’d check it out.  The main premise is “3plus2” which is 3 hard runs per week, plus 2 cross training workouts.  The hard runs are all about speed — interval work, short tempos, and long tempos (or at least long runs with tempo like speeds mixed in).  The cross training is mostly about other aerobic work where you are allowed to mix in items that will save your body from some of the pounding of running, such as swimming and biking.  They also show weight workouts and 2 running drills.

The book is filled with all kinds of tables such as:  pace charts for what your times should be for various distance races based on your current 5k race time;  times for your intervals and tempo’s based on current 5k times; training plans for 5k, 10k, and marathon; and on and on.  Lots of tables.

Since I have not actually used the book to train for a particular race, I can’t say if it is effective, though looking around at reviews on-line, many people seem happy with it.

I will say the authors were extremely prompt with responding to a couple questions I had.  For example, I had hoped I could use Heart Rate as an effort indicator instead of just pace, so I could do my long runs on trails.  That would allow me to pursue both my goals of trail ultras and speed work.  Bill Pierce responded within 24 hours that “The principle of specificity dictates that training on trails is good trainng for racing on trails.”    Later, Scott Murr did respond with a much lengthier email all about using heart rate levels, which I still have not finished due to its length!

Right now I am not concentrating on speed at all, as I have SCAR coming up (70 mile run in the Smokies on the Appalachian Trail, though I am pretty sure I will cut it to 33 or 40 miles due to my recent bought with Rocky Mountain Spotted Fever).  After SCAR I will re-assess and decide, and while I will most likely not follow the training schedules in this book exactly, I will incorporate some of the speed work into my training to see how close I can get to that 7:38 over 26 miles!