David H. and I have been talking about this run for a while, and we were finally able to find a weekend when it worked for both of us.  The Art Loeb Trail is billed as “one of the longer and more difficult trails in the state, and it’s also one of the more popular.”  Thirty one miles of tough single track sounded like a nice little run…  🙂

On Friday I drove the four hours from home to meet David in Brevard at his brother’s house.  We had to have two cars as it is a point to point run, and we had no other way to shuttle from the start to finish.  We got a quick bite to eat at a local Mexican place, went through gear and food one last time, and hit the sack.  The alarms were set for 6:00, and at 6:15 when I didn’t hear anything from David’s room, I went to wake him.  A quick coffee and we were on the road.  We dropped my car at the trail head in Pisgah near Brevard, and drove 276 up and over the mountains to the trail head at the Daniel Boone Boy Scout Camp.

Here we are at the start: 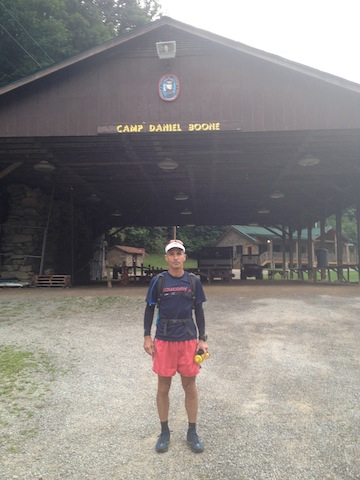 The trail head and some random shots.  As you can see, much of the trail was very overgrown!  It was also not very well marked in some places. 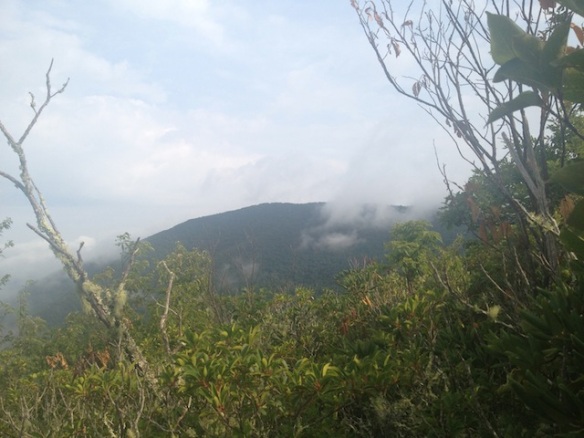 Somewhere around mile 5 or 6, David had a sharp pain on his foot.  Turns out he had a blister that he didn’t even know about pop suddenly:

While he stopped to tape it, I thought I’d head on at a leisurely place until he caught me.  After about 30 minutes, I got worried, and headed back.  I ran a full mile back before I finally found him.  He had gotten off the trail at some point and had to bushwhack back up to the ridge!  This was the 1st sign of the “run gone bad.”  Now I had an additional 2 miles on top of the planned 31!

This next section was through Shinning Rock Wilderness: 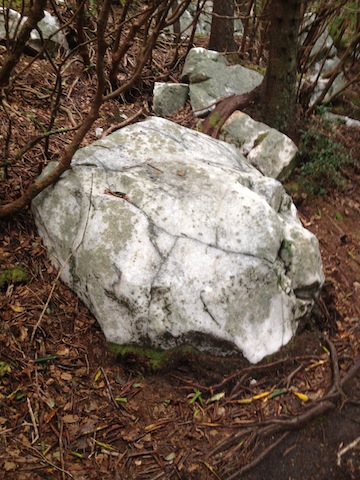 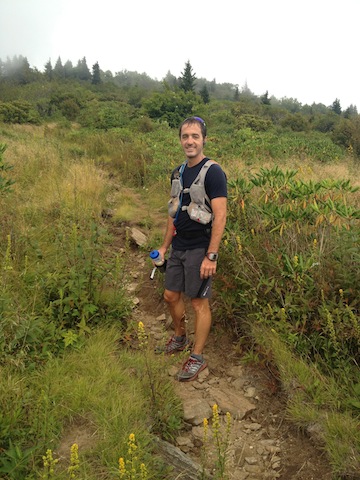 This area was incredibly crowded, with tons of people picking blue berries, a few day hikers, and a few backpackers.  Turns out we were close to the Blue Ridge Parkway and there was a paved road and a parking area close by.  There was also a pretty rough forrest road, and we saw a couple cars make it over a pretty sketchy area.  The trail was not well marked here and we actually got off the main trail and found ourselves on the rough road at one point:

We eventually found ourselves in the parking area and had to run the paved road to get back on the Art Loeb and Mountains to Sea Trail, which at this point ran together.

It was somewhere just past this that we went wrong…  David was a little ahead of me and stopped to wait at a trail junction.  There were signs for the Art Loeb and the Mountains to the Sea trail, but they were not clear at all.  We choose poorly, but did not figure it out for quite some time.  😦   The Mountains to the Sea is relatively new, and uses white circles as the blazes, while the Art Loeb uses white rectangles.  We did not know that at the time, or we would have realized our mistake much sooner!  Or if we had only had a map… The map we expected to be at David’s brother’s house were missing, and we did not have time to pick up another.  😦

As we were running along the wrong trail, we were talking about how the elevation profile did not match what we expected.  I’d never been on the trail and David had only been on it a year or more ago on a backpacking trip.  He expected a deep descent, a cross of the Blue Ridge, and then a quick climb up Pilot Mountain.  Instead we had a long gradual climb, which neither of us remembered.   (I had only looked at an elevation profile online…) We did eventually cross a road that we assumed was the Blue Ridge, but it was not labeled.

We reached a stream crossing where we decided to fill up on water: 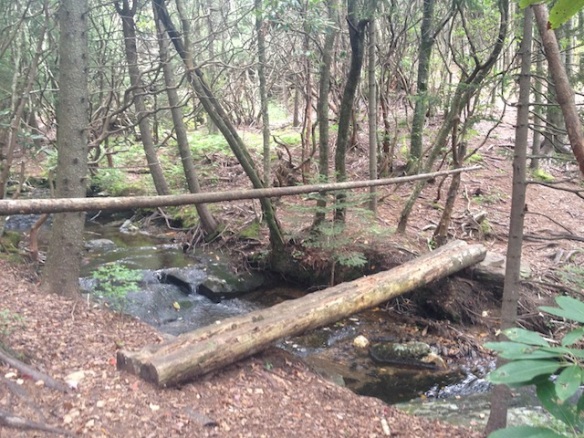 As I was standing there with fresh water in my hydration bladder, I felt an incredibly sharp “pinching” on my right achilles…  Turns out a few bees were stinging me…  I’d feel one of the stings rub the back of my shoe just about every step for the remainder of the run.  😦  20+ more miles…

Here are a few shots from this area: 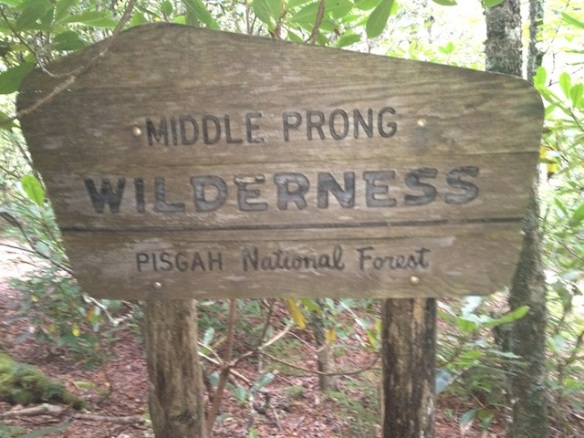 Somewhere along this point I was questioning David’s memory of the trail, and he was questioning my questions… He thought for sure we were still on the right trail, but I was beginning to have my doubts.  Then we saw a road that he did not expect to see, and he finally agreed with me!   At that point I pulled out my phone, checked the GPS, and we figured out we were pretty far from where we were supposed to be.

David saying “I have no idea where we are!”

At this point, we were so far off, we decided to bushwhack up to the road, knowing from the GPS it was the Blue Ridge.  Here’s the short 500 foot bushwhack.  Not too rough, all things considered.  I’ve had some considerably worse bushwhacks from back in my Adventure Racing and Orienteering days!

Once we got to the Blue Ridge we had to orient ourselves to figure out exactly where we were and where we had gone off track, and make a decision on how to proceed.  It looked like we could run the Blue Ridge about 3 miles east, and hit highway 215.   That looked to be a 10 – 12 mile downhill run back to our starting place and David’s car.  The alternative was to run the Blue Ridge 5 or 6 miles back to the Art Loeb, at which point we’d have a good 15-18 miles of single track left.  We really didn’t have the food or the lights to make it that far, so we opted to head back to the start.

At first I opened up some sub 9 minute miles on the newly paved 215, but my left knee started bugging me, and I was really worried about it being ITB, so I backed way off and walked a lot.

Oh, I forgot to mention, it started pouring on us.

This was a bit of a death march for me… Turns out it was about 16 miles of pavement.  Once I reached the flatter bottom, my L knee did not hurt so bad — but everything else did!  David ran ahead the whole way and his quads are now paying for it, while I feel pretty good.  🙂

There was a pretty nice waterfall along the way:

At some point on this road, I heard a gun shot.  And then another, and another, and then some semi-automatics opened up.  I was a little concerned that I might be running through a red-neck party gone bad, and they might not take to a lone runner that well.  I was picking up the pace to a sub 8:00 to get the heck out of there, when I saw this sign, and felt somewhat relieved:

Yet a minute later I saw this and realized that a shooting range may not be so safe afterall:

I struggled on a few miles until the sign for the Daniel Boone Boyscout Camp, and made it up that road about 2.5 miles just a half mile short of the car, when David finally came around to pick me up.  I wondered what had taken him so long!

Here’s a map of the run… Right where we turn west along the Blue Ridge, we were supposed to head steeply down and cross the road to continue on the Art Loeb…  Instead we headed a few miles west on the Mountains to the Sea, picked up the Blue Ridge, and then headed down 215… 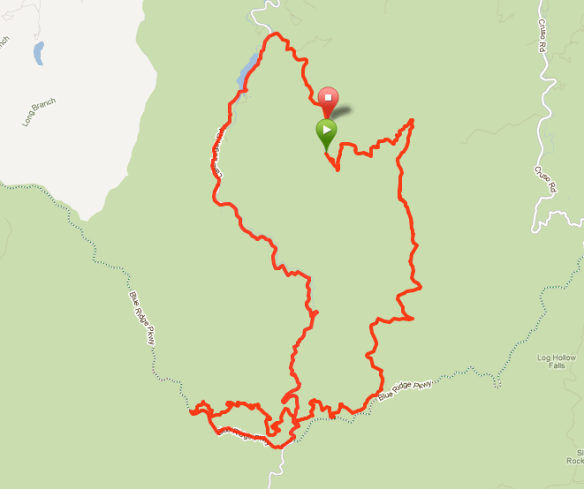 And here’s the elevation…  That first 7 miles is quite the climb!  It was pretty hard to maintain anything better than a 20:00/mile pace there…

We were pretty exhausted, of course.  42 miles is a long long ways to go on foot.  🙂   We headed back over the mountain to pick up my car, and then went straight to dinner before showering as it was getting late and places to eat shut down in Brevard pretty early!

All in all a good run, but I do hope to go back and run the trail proper in the not too distance future…