Make sure you read the lead-in 1st.

None of the information in the lead-in was meant to be an excuse.  Yeah the final 13 days before the race didn’t go quite as expected, and 10 days off from running was not ideal, but I don’t think any of that really played into my race day blues.  I had a great first 22 miles.  But I’m getting ahead of myself.

I think I’ll just do a quick re-cap and then list out some thoughts.  Writing a race report for the same race four years in a row gets a little old.  You can see the elevation profile and some shots of the trail in past years’ reports (2010, 2011, 2012).

Race-recap:  The last shuttle was leaving but there were no more seats!  Turns out there were about 20 of us in that situation, so we got on the real last shuttle.  I got to sit next to Scott, who I could tell was a bit nervous as he was about to run his 1st ultra!  The driver seemed to take his time deciding to leave until I gently prompted him that we should check with the folks in charge if we should get going…

After the 10 minute ride to the start, as we were getting off the bus, the race director was yelled “5 minutes to go! Hurry Hurry!”  I still had a lot of extra clothes on (it was 19F!) and I thought I’d hit the port-a-pot one last time, and I had just enough time to get all my gear right and drop my drop-bag in the big pile of bags and run to the start.  Just in time to hear the 2 minute pre-race briefing and we were off.

Right out of the gate and up the 1st big hill, I was in the top 10 runners, which was not wise.  In fact, I was just behind Brandon, who I knew was going for a sub 7:00, so it was a little silly for me to be up there.  The lead 5 or 6 went off the wrong way, and before I could say anything Brandon was yelling and corralling them back in.  I’d like to note that this is the same “split” that I missed in my training run three weeks ago — when it was dark and foggy.  But really, if you’ve never run this race, it would not be obvious at all to turn.  I thought in past years there was a rope, but maybe not.  Turns out the 20 milers an hour later and 8 milers two hours later all did the same thing.

Well, it took a couple miles for me to back off, but I finally did, and felt pretty good.  I walked all the really steep hills and ran everything else.  I never felt like I was pushing too hard, though in hindsight I probably was.  I was looking at my pacing and comparing it to last year, when I broke 8:00 hours, which to me was always only possible on a near perfect day.  Could I possibly replicate that again?

To cut a long story short, I ran the first 22 miles pretty well, often trading places with Ernest whom I had met and run with last year.  I hit the turn at 20 miles in 3:45, pretty much the exact same time as last year.  I was in and out in 1-2 minutes, and I felt even better coming out of the turn than going in.  For about two miles.  It was then that I felt like I was fading, and fading fast.  I let Ernest pass and said “have a great race!” because I knew then I was going to suffer.

There’s not much to say about the last 18 miles…  It was a struggle.  I walked just as much as I ran.  Nothing major was wrong, just lots of little things.  Left knee was bugging me, breathing was not great, nutrition was not bad but nothing really hit the spot and gave me the big burst of energy that I so needed.

One thing that did help is that when I reached mile 32, I saw Jason there.  He had taken kid duty of his own two and our two while Kelly and Lauren ran the 8, but had opted to hang out there and run in with me.  I felt terrible as I was more than an hour behind when I would have been had I been able to duplicate the sub 8:00.  But it was nice to have someone with me, and now I know what it would feel like to have a pacer, if I ever have one.  Anyone reading this that wants to pace me at Leadville this year, please let me know.  🙂   I did tell Jason to run off a few times — he was fresh and itching to get in a work out, and I didn’t want him to get too cold “running” at my pace.

I finished in 8:49, 52 minutes slower than last year, but only a minute or two faster than two years ago.  I had actually gone into this year thinking anything under 8:30 would be pretty decent, though of course I secretly hoped I could better last year’s 7:57.  All that to say I’m not really super disappointed.  I know the 7:57 might just be one of my best runs ever and I shouldn’t expect to run like that every time I head out the door…

Thanks to Shannon who caught this photo at the finish: 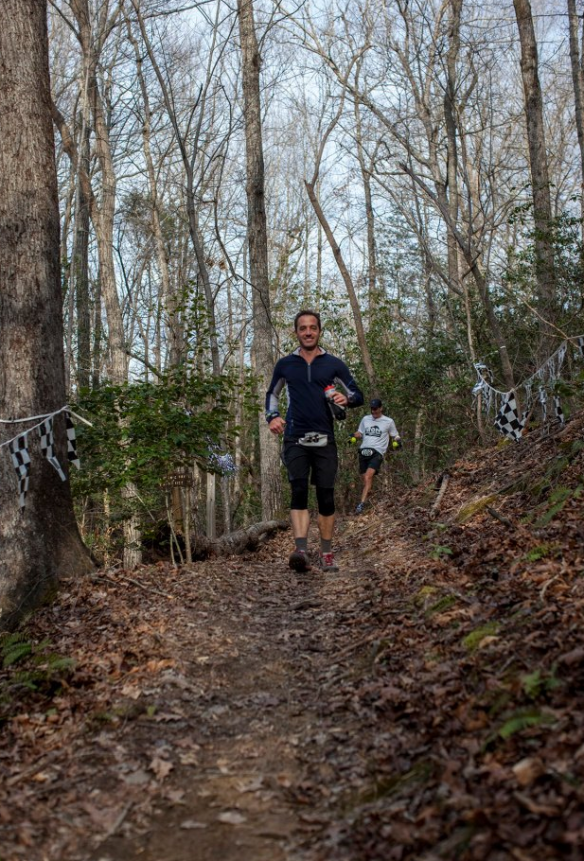 That’s Jay behind me, who drafted off me for, oh, 8 or 10 miles last year, before I finally pushed him on with 5 miles to go.  🙂  This year we struggled in together from about 35 on…

Ok, here are my thoughts on specific items: