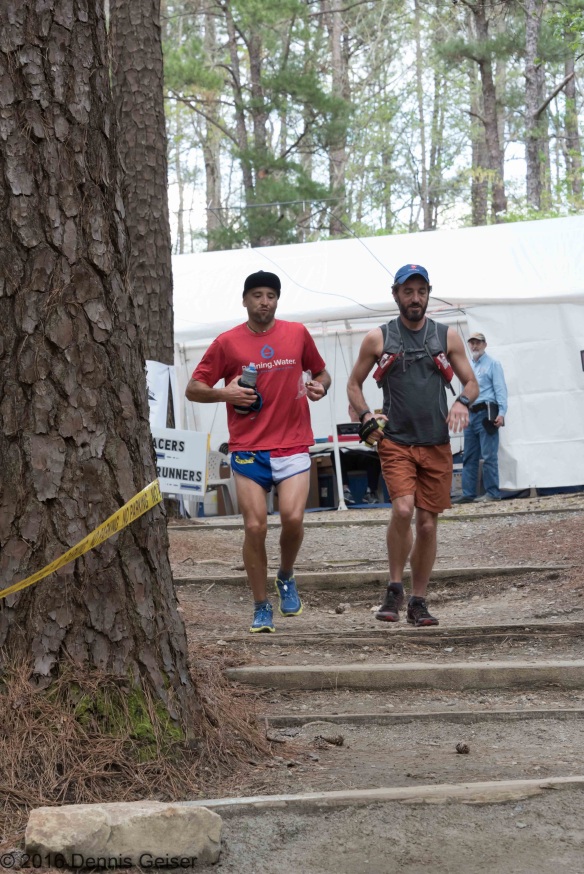 My friend Jason Tischer asked me to pace the last two loops of the Umstead 100 for him (a race with eight 12.5 mile loops).  I was worried because Jason is FAST, and I didn’t want him to have to drop me because I was slowing him down!  But I agreed to it and I’m glad I did.

It was a bit complicated because Kelly, the kids and I were up in the mountains the day the 100 started, and we had to pack up, clean up, and get home.  Umstead started at 6 a.m. and I had signed up to receive text alerts for Jason’s splits at the start/finish and halfway points of each of the eight 12.5 mile loops.   They started rolling in while we were still in the mountains, and I began to worry that he was going so fast that I’d have trouble getting there in time!

On the drive home the kids wanted to eat Chipotle, and while I was worried about the time, we made a quick pit stop, then went on to home.  I had just enough time to unpack the car, grab my lights (which needed to be charged!) and other gear, and drive the 45-60 minutes over to the park.  Alerts kept coming in keeping me up to date, and I figured I had just enough time to grab and iced americano outside the park to “fuel up” and get to the start.  I ended up with about 40-45 minutes to spare, which was good.

While waiting, I discovered that Jason was in 1st!  Now the pressure was really on.   We headed out on the 1st loop but his lead had been cut in half by the 2nd place runner — the 1st place female.  We’d be watching the splits the rest of the way.

Jason was hurting after 75 miles but still strong enough to run everything, and there are roughly 1000′ of elevation gain per loop!  I’m the kind of ultra runner that power hikes all the hills, but I ran them all with Jason.  The pace was such that I was able to run ahead and refill his bottles, etc.

Jason slowed on the 2nd half of the 1st loop, but when we got back to the start/finish to start the final loop and heard his lead was down to single digits, he got some umph back and we picked up the pace.  In the end Jason would win the race in 15 hrs 31 minutes by 11 or 12 minutes!  It was great to be a part of that and I’m glad I was able to help Jason out.