MST 50K was a bit of a strange race for me… The 1st half, I was pretty down on myself, but in the end I turned it around and had a great result.  I tried to capture my thoughts in an email to Lucho so I’ll just include those here:

Second half turn around

I ended up passing 8 runners on the way in and finished in 7th overall…  With almost an even split.  Strava race analysis: 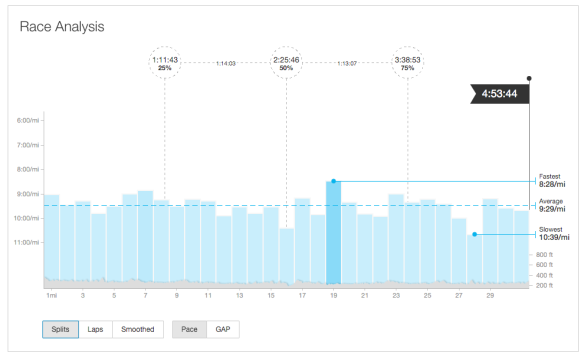 More people ran negative/near even splits than I expected — at least compared to Uhwarrie 40!  I’m quite happy with just the 4 minute difference…

Gear — nearly the same set up as Uhwarrie…

In that same email to Lucho I also outlined my dilemma on running the Jordan Lake 12 hour 6 days later:

Lucho and I discussed on the phone and we decided to see how the week played out.  I ran three miles each on Wednesday and Thursday, and the Thursday run I was starting to feel good, but stated I didn’t feel ready to run 2 or 3 hours at MAF come Saturday.   Lucho responded, but you’ll have to read the next post to see how that panned out.  🙂